Get other cruise information at CruiseCritic

Washington D.C. is a place every American should visit at least once. It’s a great city, and thankfully we live close enough to Washington D.C. that we can go whenever we want. DC is a fairly small place and is very easy to transit around. Uber waits are always less than 5 minutes. However I HIGHLY recommend using the Metro if you’re heading to the area. Metro will get you anywhere you need to go fairly quickly for a good price. DC has one of the best Metro/subway systems in the entire United States. The beauty is that you can take Amtrak directly into D.C. into Union Station, walk up 1 floor and hop on Metro and go anywhere you want. Here are some of the top attractions there are to do in D.C. and we like to go to them whenever we go into the District. Even if we’ve been to them before, they’re always fun to go to.

Everything I have listed is free (as is pretty much everything in D.C.) unless otherwise noted. 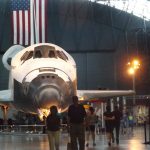 Now this isn’t in D.C. This is in Chantilly but this is where the space shuttle Discovery is, as well as a ton of other aircraft. This is my FAVORITE air and space museum. The hours are 10a-5p and is located at 14390 Air & Space Museum Parkway. This is a Smithsonian property so it’s free to get in. However, parking is suppose to be $15 but the last time I was there, it was free.

Now this is the 1 museum I have not been in, mainly because when we went there were eleventy-bazillion people in line to get in. We skipped this but I do plan on going back and checking this place out. 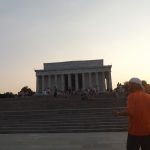 The Lincoln Memorial is located along the orange/blue lines on the Metro, at the Foggy Bottom stop and is open 24/7. It’s so much larger in person than it is in pictures.

The reflecting pool is located along the orange/blue line at the Smithsonian stop or Foggy Bottom and is open 24/7 as well. However I recommend going during the day to enjoy it more.

This isn’t far from the Lincoln Memorial at all. It’s located along the orange/blue line at the Smithsonian stop and is open 24/7. 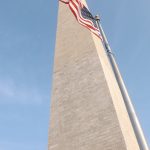 This is a huge park basically. You can make reservations (months) in advance and go to the top. This is a big icon in D.C. and will be the first thing you see when you come into Washington D.C. Grab a lunch and sit around the base of the monument and have lunch. This is located on the orange/blue line and is at the Smithsonian stop.

Some people may not be interested in this, but the headquarters for the FBI is a pretty cool building to see. It’s located on the orange/blue line at the Federal Triangle & McPherson stop.

There is nothing specific about Chinatown but it’s definitely a cool area to check out and go through. The name speaks for itself. It’s on the Green/Yellow/Red line at the Gallery Place/Chinatown stop. 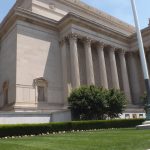 The National Archives is amazing. It’s cool to see the Bill of Rights, Constitution, Declaration of Independence, Louisiana Purchase, Emancipation Proclamation among so many other important historic documents. It’s an awesome place and something you have to see! The line to get in can be pretty long at times. I highly recommend making advanced reservations here. The cost for advanced reservations is $1.50 but well worth it to not have the line. Otherwise it’s free. The National Archives is located on the Green/Yellow line at the Archives/Navy Memorial/Penn Qtr stop and they are closed on the weekends.

The highest authority in the United States. This is simply an amazing building to be in. When you’re there, you can look in the courtroom if a case isn’t in session. To feel the power of that building is simply breathtaking. They are located on the orange/blue line at the Capitol South stop. They are closed on weekends and the normal hours are 9a-3p

This is probably the second most famous landmark in D.C. behind only The White House. You can go in and take a tour which is really neat. The rotunda and the basement where you see the pillars is awesome. I highly recommend visiting here! It’s located on the orange/blue line at the Federal Center stop. The hours are 8:30a-4:30p

Really neat to go in here. You definitely get a “throw-back” to see the history of “things” from American history. This is also where the Star Spangled Banner is, and that is simply breathtaking. It’s something I cannot even explain, you just need to see it for yourself. The museum is on the Orange/Blue line at the Smithsonian stop. The hours are 10a-5p

This is where the President of the United States of America lives. This is something every American should see. You can schedule a tour 6 months in advance (minumum) through your local congressman. You cannot just walk up to the White House as it’s very secure with Secret Service agents all around. It’s located on the Orange/Blue line at Federal Triangle & McPherson Square. 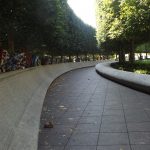 Very somber memorial where you can see all of the names of law enforcement personnel who lost their lives in the line of duty. At the time of this writing, it is an outdoor memorial at the top of the Metro stairs. However they are currently building an indoor memorial near it. The memorial is on the Red line at Judiciary Square/F St. Exit 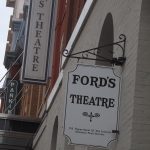 This is where Abraham Lincoln was murdered by John Wilkes Booth. You can sit and watch the United States Park Service give all of the details on the stage, and see the very seat that President Lincoln was sitting in when he was murdered. You can also tour downstairs at some exhibits such as the hat President Lincoln was wearing, the bloody pillow and the gun that was used as well. This is probably my favorite thing to visit in Washington D.C. It’s located on the Orange/Blue line at the 11th St. (Metro Center/Gallery Place) stop. It opens at 11am but I recommend getting there early that morning to get your ticket for the day so you can go at the time you wish.

To me, this was the biggest waste of money. Rather than getting to see a bunch of cool old spy exhibits, they make you play some stupid game and it’s just not worth it. If you want to go, it’s on the Green/Yellow/Red line at Gallery Place/Chinatown and cost $59 per person to enter. Their hours are 9a-6p.

This is similar to the International Spy Museum, in fact we peeped in and skipped it. It’s $59 per person and their hours are 9a-7p and are located on the Green/Yellow/Red line at Gallery Place/Chinatown as well.

This was my wife, not me. I honestly don’t remember much about it simply because plants don’t interest me. It’s on the Orange/Blue line at Federal Center. They’re open 10a-5p

This is where Flight 77 crashed into The Pentagon on September 11th, 2011. The memorials are new-age and it’s a really touching thing to see. Something I do recommend. *Any photography of The Pentagon is prohibited, so be careful with your cameras. This is located on the Yellow or Blue line at the Pentagon stop.

This is a fun museum for kids. The Hope Diamond is here which is cool to see. The hours are 10a-5p and is located on the Orange/Blue line at the Smithsonian stop.

This is another cool museum, definitely nowhere near as cool as the Air & Space Museum II though. It’s on the Orange/Blue line at the Smithsonian stop. The hours are 10a-5p 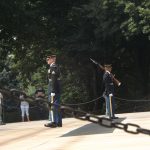 This is something that I recommend to everyone. You can take a tour bus to the top, then walk back down (or ride the bus back down). So many tombstones you see here, very sad place. I HIGHLY recommend watching the changing of the guard at the Tomb of the Unknown Soldier and also checking out the grave of President John F. Kennedy and his family. The cemetery is on the Blue line at Arlington National Cemetery stop. It’s open 8a-7p

Another memorial for everyone who lost their life in Iwo Jima. Very nice memorial located on the Blue line at Arlington National Cemetery stop.

A memorial for everyone who lost their life in World War II. Very sad to see all of the names. Please try to stay as quiet as you can here. Keep your kids quiet. It’s located on the Orange/Blue line at the Smithsonian stop.

A memorial for those who lost their life in the Korean war. Located on the Orange/Blue line at the Foggy Bottom stop.

A memorial for those who lost their life in the Vietname war. Located on the Orange/Blue line at the Foggy Bottom.

A huge beautiful church that is worth a visit to check out. I am not a religious person but this church is not to be missed. It’s open 10a-4p and is on the Red line. Exit the Tenleytown stop then take any 30’s bus to the church. Admission is $16.

We did not have time to go here either. It’s open 10a-4p and is at the Dupont Circle stop on the Red line. Cost is $25 to enter.

Bureau of Engraving and Printing –

This is something we thought was awesome. They have a million dollars in the lobby you can see. You go in and watch them make money. How cool is that? Get there EARLY so you can get a ticket to get in. They only give out a limited number of tickets each day and it’s first come first serve. They open at 8a Mon-Fri. They’re at the Smithsonian stop on the Orange/Blue line.

Ok this isn’t in D.C. but it’s not far. The address is 3200 Mount Vernon Memorial Highway. The cost is $43 to get in but well worth it. This was George Washingtons plantation. You can go into his house and see his farm. It’s something I highly recommend.

Where to stay? There are a ton of hotels in and around DC. I like to stay at Hyatt Place on New York Ave NE in the NoMa district. It’s an up and coming neighborhood and is very secure. There is a Metro stop a block away and the ATF is next door to the hotel so it’s safe. The hotel is on the Red Line at NoMa/Gallaudet U stop. They do charge $30 a day for parking but that’s normal for DC.

That’s a lot to take in and a lot to do. However you can do all of that in 5 days if planned right. I have created a document that groups things together by location and sorts by time. If you follow this, you will be able to do everything.

There are a ton of hotels in and around DC. I like to stay at Hyatt Place on New York Ave NE in the NoMa district. It’s an up and coming neighborhood and is very secure. There is a Metro stop a block away and the ATF is next door to the hotel so it’s safe. The hotel is on the Red Line at NoMa/Gallaudet U stop. They do charge $30 a day for parking but that’s normal for DC.

That’s a lot to take in and a lot to do. However you can do all of that in 5 days if planned right. I have created a document that groups things together by location and sorts by time. If you follow this, you will be able to do everything.