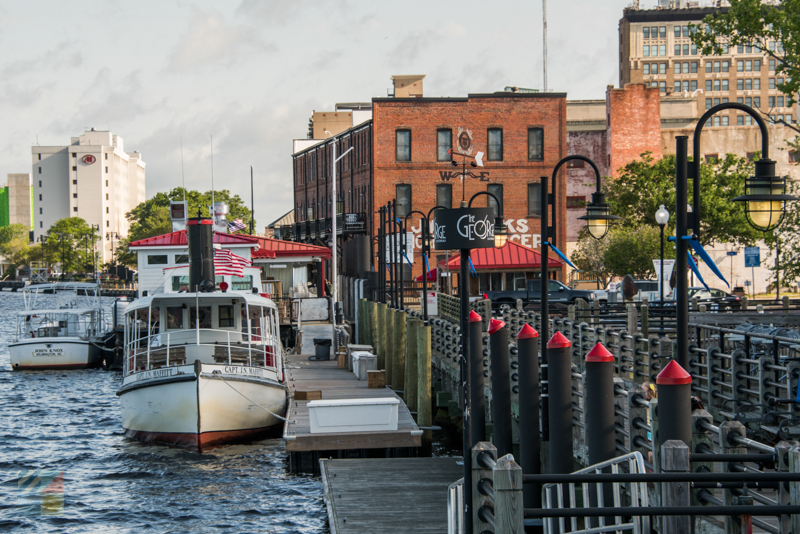 When we were at the Embassy Suites in Orlando we had one of their timeshare reps come up to us in the lobby asking if we wanted to tour the timeshare in exchange for a 7 night vacation to Myrtle Beach for free, + a night free at any Hilton property afterward + $100 back.

I mean, absolutely. I love free vacations. We had no intentions of buying a timeshare, but it’s worth an hour of my time.

Now let me start this entry by saying I absolutely hate Myrtle Beach. It’s nasty, ghetto and just a horrible beach. But, it was free. So, sit back and relax and here we go!

Since this isn’t an active vacation as much as when we’re in the Caribbean I am going to do this by city instead of by day. We rented a car for this trip, for some reason. We picked up our rental car and headed to Wilmington.

Now, I lived in Wilmington for a minute with my cousin Frank. I love Wilmington. I love everything about the city. We got to Wilmington and went to our hotel which was the Hampton Inn across from the medical center. We checked in and unpacked. The room was really nice, a typical Hilton property. This room however had very high vaulted ceilings. I’ve never stayed in a room like that before. It was really nice though. As you know from my other posts, if we don’t stay in an Airbnb I prefer Marriott or Hilton properties.

Once we checked in, we drove a few blocks downtown to enjoy the downtown area.

The first thing we did was walk to Old Wilmington City Market which was a really neat old market from the 1800’s. We did a little shopping, and bought some Christmas gifts. Yes, in July. We shop year round for Christmas gifts and are typically done by October. The Market was small but had some really cool and unique gifts in it.

From there, we walked over to the Wilmington River Walk, which is a boardwalk along the Cape Fear River. We hung out on the boardwalk for a while, just watching people and enjoying the views. We went in a few shops, and then walked up a block to downtown Wilmington where we’d go into some more shops.

By this time, we were hungry so we pulled up Google Maps to see what food options were around us.  We ended up going into Fat Tony’s Italian Pub to grab dinner. It was very good food, and good service. Kobie and I got pizza, Kolbrin got a grilled cheese and Amanda got some chicken something or other. We all enjoyed our food though.

After we left Fat Tony’s, we went to Pink Baking Company which was almost across the street to get some desserts. Well, so Kolbrin could.

He got a brownie and the rest of us watched him eat. He enjoyed it though. Then again, what 7 year old doesn’t like a brownie. After we/he finished at Pink Baking Company, we went to the Chandler’s Warf to see what shops were in there.

However this was a Sunday evening so everything in there was closed.

Once we left Chandler’s Warf we went back to the Riverwalk to enjoy the evening. By the time it got dark, we needed something to do.

We ended up going over to Green Light Escape Room to try their escape room. We loved it!! We did escape the escape room.

From there, we walked around downtown Wilmington a little more, before heading back to the hotel since we were getting tired.

After we finished the escape room, we walked around downtown for a bit, before leaving. When we left, I took my boys over to Screen Gems Studios to show them where a lot of movies are filmed.

Fun fact, Wilmington is one of the top filming locations in the United States.

Once we left Screen Gems, we hopped over to Carolina Beach and drove down to Kure Beach where we went to the North Carolina Aquarium.

I love this aquarium. I love the Kure Beach area in general. We let the boys take their time in the aquarium and just enjoyed our time there. We were in no hurry.

Once we were done at the North Carolina Aquarium at Fort Fisher, we went down to catch the ferry. We were done in Wilmington.

We hopped on the 4pm ferry to ride down to Southport. That was our next destination.

Our ferry arrived in Southport, which is an awesome little town. If you’ve ever seen “Under the Dome” (TV series) by Stephen King, that was all filmed in Southport.

Once we got into Southport we were hungry so we went to find food. We found ourselves at Provision Company which is a little hole in the wall but oh man, their food was simply amazing. To this day Amanda says it’s the best chicken sandwich she’s ever had. It was great food.

After we left Provision Company, we walked around the town of Southport but it was later in the day so everything was closed. It was such a neat town though.

While in town, we walked to Spikes and got some ice cream and milkshakes. After Spikes, we went back down to the water to enjoy ourselves.

Mainly, Amanda and I wanted to go back to “the bench”. The Bench is where we spent some time when we were in Southport on our honeymoon.

After we were done in Southport, we went over to Oak Island to the lighthouse and to spend some time there.

Oak Island is such a relaxed place. After we were done in Oak Island, we went to check into our hotel which was the Hampton Inn right outside of Oak Island, right at Southport.

The hotel was brand new since the previous Hampton Inn was destroyed by the hurricane. It was a nice hotel.

At dinner, I ordered Provision Company from Door Dash. However we got a notice from Door Dash that our order was cancelled due to not having a driver. So I went down and picked up our dinner. It was just as good!!

The next morning we woke up, and was heading to Myrtle Beach.

We arrived in Myrtle Beach about an hour later and checked into our hotel. We were staying at the Doubletree by Hilton at the very end of the strip. This isn’t originally a Doubletree resort but they purchased it. It’s located at the Springmaid Pier.

The pier was gone since it was destroyed by the hurricane. The hotel itself I could not recommend to anyone. It was not a typical Hilton property. Not very nice at all.

We got checked in, and went to Broadway at the Beach to do some shopping and find lunch. We ended up eating at Johnny Rockets for lunch We did lots of shopping, and went to the Ripleys Mirror Maze.

The next day, we went to Tanger Outlet on 17 to spend the day shopping. We literally spent all day here shopping.

After we were done shopping, we went up to Calabash to eat dinner. Not one of these faux “real Calabash seafood” restaurants you see all up and down 17 in Myrtle Beach, but to the town of Calabash to get some fresh seafood.

We went to Dockside Seafood House since we’re familiar with it. The food was outstanding as always. I love their shrimp. Then we did some shopping in Calabash before heading back south to our hotel.

The next day, we went to Tanger Outlets on 501 to spend the day shopping. Like the previous day, we spent all day here shopping.

Once we were done, we went to play putt-putt and had fun. After putt-putt we went down to Murrells Inlet to get dinner. We went to Dead Dog Saloon which we enjoy. Their hush puppies are amazing.

After that, we went to Broadway to hang out for the night.

The next day, we woke up and went to “13 Doors Escape Room”. It was an ok escape room, but none of us were thrilled with it. Not the type of escape room we’re accustomed to.

After we left there, we went to do some more shopping around the Myrtle Beach area, then went to play some more putt putt. Then we went back to hangout at the hotel for a bit, and get ready for dinner.

For dinner we went back to Murrells Inlet to get dinner. This time we went to Drunken Jacks. Another favorite of ours. The food once again did not disappoint. After that, we just hung out around the hotel.

The next day we went to do our timeshare presentation, which the property was very nice but I would not purchase a timeshare at Myrtle Beach.

As I mentioned previously, I do not like Myrtle Beach. Now if it were Savannah or Charleston, perhaps. We spent the rest of the day just hanging out around the area. I can’t remember where we ate dinner this night.

The following day we ended up leaving to come back home. We enjoyed our trip to my old home, Southport, and Myrtle Beach. It was worth the 45 minute timeshare tour.

The only down side is we have no trips planned until May. In May we’ll be heading to Puerto Rico which will be my next entry. Thanks for following!