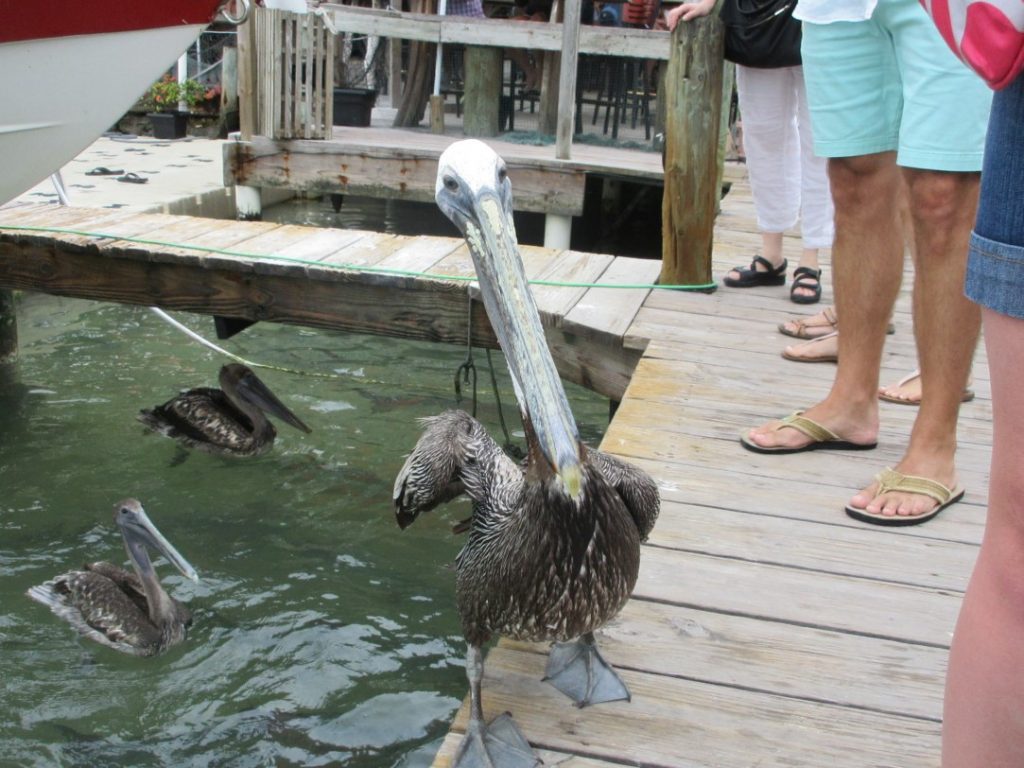 We got on Florida Turnpike and south to the Keys we went! We stopped in Islamorada at Robbie’s so my kids could feed the tarpon and we could stretch our legs. It was about $20 for 3 buckets of fish so we could go out on the dock and feed the tarpon.

This was fun, my youngest really enjoyed it. Be cautious when you go here because the pelicans are very aggressive. As my youngest was holding a fish about to throw it in the water, a pelican snatched it right out of his hand. They will surround you on the dock if you’re not careful. Hold on to your bucket and shoo them away if you can. The tarpon are pretty large and fast. It’s fun to watch them eat.

After we left Robbie’s, we hopped back on US 1 and headed south a little further to Marathon Key. There we stopped at The Sea Turtle Hospital. This was a really cool place that we enjoyed. They turned an old night club and hotel into a turtle hospital that’s now a non-profit clinic for sea turtles. They catch, treat and release (when possible) injured sea turtles. 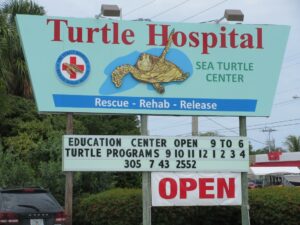 They have removed tumors, trash, corrected “bubble butt”, shark attacks and other issues that sea turtles encounter. Sometimes a sea turtle is just in too bad of shape to release back into the Gulf of Mexico or the Atlantic Ocean so they have places there for them.

Once we were finished at The Sea Turtle Hospital, back on US 1 we went and kept driving. Over the 7 Mile Bridge we went (yep, it’s really 7 miles, I measured it) and into the lower keys.

The views driving down US1 are just awesome. Heading south, on the right hand side of you is the Gulf of Mexico and on the left hand side is the Atlantic Ocean.

It’s so pretty to look out over the water, to see all of the boats, abandoned bridges, fisherman, and tiny islands that compose the Florida Keys. It’d be nice to drive on a warm summer day in a convertible. Unfortunately, I was in a Santa Fe. Oh well, maybe next time. 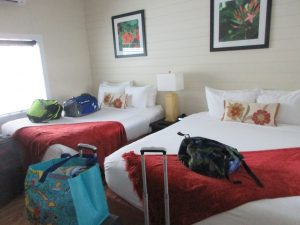 Finally we reached Key West and on to our hotel. We ended up staying at Southwinds which is only a block from the Southernmost Point & Higgs Beach. I found it on Hotels.com and had good reviews. It was a nice place, comfy beds, no complaints. It was in a perfect location also. We were a block from Duval Street. If you’re not familiar, Duval Street is the artery of Key West. It runs from the Gulf of Mexico to the Atlantic Ocean, and is full of shops, restaurants, and points of interest. 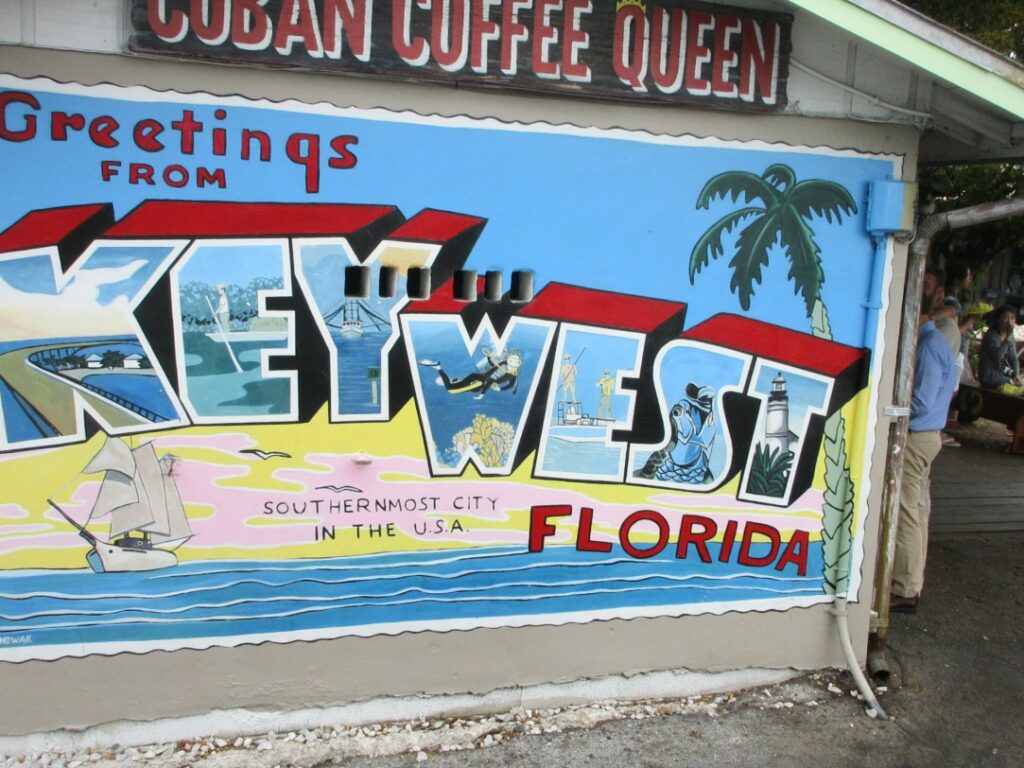 We got all of our luggage unloaded and settled into the room. Then we were hungry so decided to walk down Duval Street to see what we could find. I loved the chickens everywhere. Such pretty roosters roaming the streets. Now they had chickens running wild pretty much everywhere we went along with other animals, but the roosters in Key West were beautiful in color.

As we were walking, we passed a street vendor trying to get money from people to hold his bird. Well I had already paid for the boys to hold an alligator, be seen with the sea lion, hold a monkey in St. Kitts and be with a donkey in St. Kitts also. Why not. I paid the guy and the boys got their pictures with a parrot on their head. 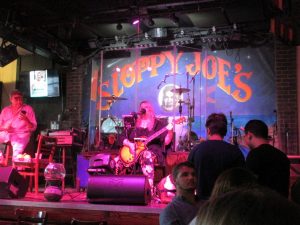 We ended up walking down to Mallory Square to watch the sunset and then some of the street performers. Mallory Square is where everything happens in Key West, that isn’t happening on Duval Street. The performer we watched was really good, and very funny. We enjoyed him. We would have stayed longer but we were starving and the kids were whining. So we ended up walking up to Sloppy Joe’s Bar for some dinner.

The food was okay, everyone enjoyed it. I of course got a Sloppy Joe. I must say, Del Monte Sloppy Joe Mix from the grocery store makes better Sloppy Joe. I just wasn’t as impressed as I thought I would be. It was still good though. It was $57 for the 4 of us.

After we left Sloppy Joe’s, we headed back up Duval St since we were getting tired and it was getting later in the day. BOOM, Duval St goes dark. The power goes out! Everything is dark. Now imagine Key West on a busy night, with no power. It was dark walking back but eventually the power came back on. Everyone cheered! That was fun. 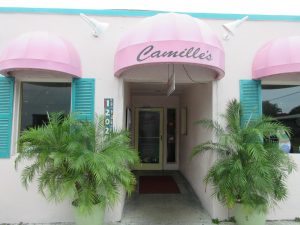 The next morning I woke up and my oldest was awake. Mom didn’t feel great and youngin’ wanted to stay in the room and play on his Nintendo DS. So my oldest and I decided to walk down to the Southernmost Point of the continental USA. We had to go here just for the fact that EVERYONE who goes to Key West has a picture here. We were no different. There was a line to get a picture, but it only had about 30 people in it. It moved quick. We got our picture taken with the buoy and then kept walking up to Camille’s for breakfast. It was good food. While we were eating mom got out of bed and texted me to see where we were. They ended up walking up and joining us. Camille’s was cheap to eat, $46 for the 4 of us. 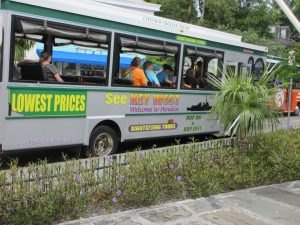 After breakfast, we ended up going to ride the trolley around town to see everything and get where we wanted to. We bought passes online prior to heading to Key West through City View Trolley. We chose them over Old Town because their route was bigger and it was actually cheaper when you factor in kids prices. So we had 2 days of hop-on/hop-off trolley rides all over Key West.

It was fun, the driver was awesome and the route was great. The driver showed us all of the hot spots on Duval, showed us the Ernest Hemingway house, the Key West Lighthouse & Keeper’s Quarters, Kermit’s Key ^West Lime Shoppe, the marina, and pretty much everything else in Key West there is to see. After we got off of the trolley, we walked back down to Kermit’s and bought some Key Lime Pie, and some other things we really liked. My wife also bought 2 Key Lime cakes. Remember that, it will come into play later in the blog. 😉 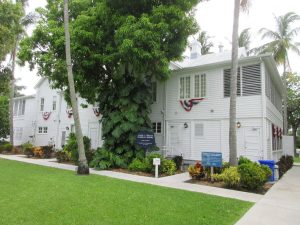 After we finished shopping around the area and walking around, we hopped back on the trolley and headed to Truman’s Little White House. This was a very interesting place. We did the tour which took maybe 45 minutes. We learned a lot about it though as well as President Truman. One interesting fact I learned is that this house is still a United States Secret Service operated house. Yep, it’s still secured by the US Secret Service for presidential use. The last President to stay here was Bill Clinton but an invite was extended to Obama and Trump as well. There was so much history in this house. It was really cool.

After we finished our tour at The Little White House, we walked back up Duval St to find some food. We were starving! 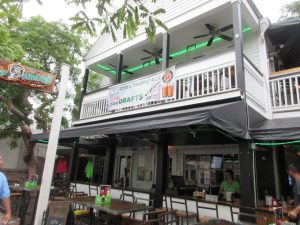 We ended up stopping at The Gas Monkey which honestly, was the best food I had eaten since we disembarked the ship. Their chips and salsa and buffalo chicken is on point. Man I cannot wait to go back here. This place is excellent. I highly recommend it! It was $56 for the 4 of us here.

After we finished eating at The Gas Monkey, we kept walking up Duval to do some more shopping. I wanted a Key West shirt but nobody had any I REALLY liked.

Finally, a few stores from Mattheessen’s, there’s a kids store. Right next to the kids store is another store that custom makes shirts. We ended up getting I think 7 shirts there for around $150. TONS of designs to chose from. Yes they’re heat pressed but if you take care of them they will last.

After we bought our shirts, we stopped at Mattheessen’s for some cookies. These cookies are the size of a pancake, or larger. It was $20 for 3 cookies, but they were huge.

We hung out a little more on Duval St until it was dark. This was our last night in Key West. BOO!

After we were done on Duval, we headed back to our room to get things packed up. I washed a load of laundry so we wouldn’t have a ton of it. We got everything ready to go in the morning and went to bed.