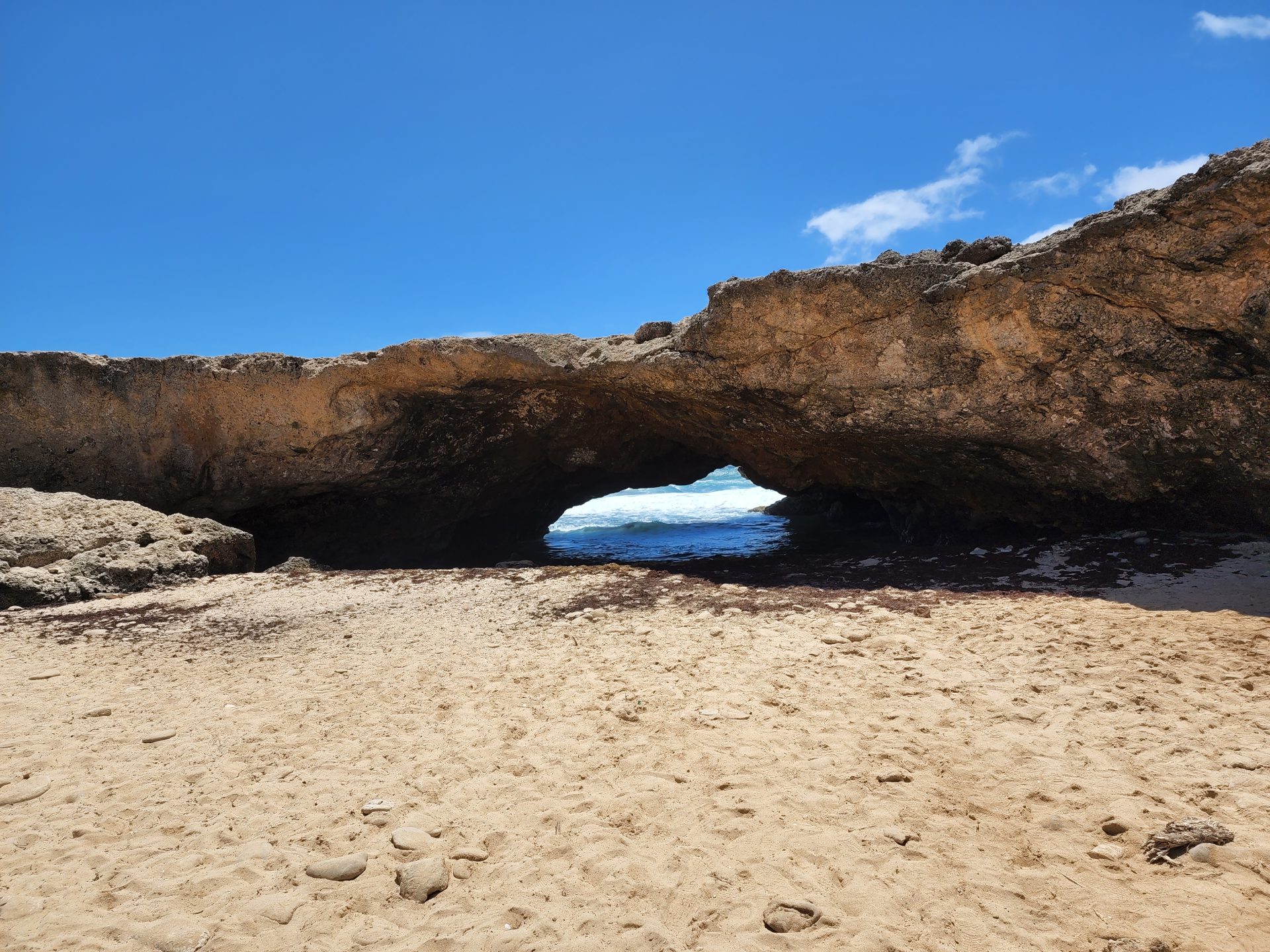 We have been to Aruba before, so we knew what to expect. Last time we were in Aruba, we spent the day at Flamingo Island which is the private island with flamingos. It was fun, but this time we wanted something more fun and adventurous. I ended up booking a 6 seater UTV from Off-Road Evolution Aruba. I booked this UTV back on January 23rd. The cost for the UTV is $380 plus a $500 security deposit. They have other vehicles you can rent as well, such as 2 seaters, 4 seaters, 5 seaters and Jeeps. If you’re heading to Aruba, I highly recommend Off-Road Evolution Aruba. This is owned by Ian and Croushenka. I was in contact with them from the time I booked, up until the end. Croushenka does all of the communication and office work, and Ian does all of the “in-field” work.

We arrived in port at 8am. Our cabin was across the hall from the Family Harbor lounge, so we went over to the lounge to grab breakfast. This is nice because it’s a hot buffet only for Family Harbor guests. We got our breakfast and came back to the cabin. We sat on the balcony and watched people debark the ship. We had an hour until we were to pick up out UTV so we had time to kill. Plus it allowed the crowd to be gone for our debarkation.

Once it was about 8:45, we decided to go ahead and get off the ship. We walked off, through security and the port area and we were clear. We walked next door to the Citgo where Ian said he would meet us.

Ian showed up on the UTV and picked us up, and took us back to their establishment so we could sign the paperwork and go over everything. It was about a 5 minute ride away from the port.

Once we signed our paperwork and got the vehicle, off we went! Our first stop we hit was the California Lighthouse. The lighthouse has precisely 9,437,237 steps to the top. +/- 4. It cost $5 per person to climb to the top, so $20 for us to go to the top. It is spiral steps as typical for a lighthouse. Once you’re at the top though, the views are amazing of the island. This is also a top spot for a lot of the excursions from the cruise line, so I recommend going here first before all of the cruise passengers arrive. It would be hectic with a large excursion.

Once we left the lighthouse, we drove into the dessert to hit the upper loop of the trails. It was pretty cool being in the desert next to the ocean. There were lots of cacti and rock formations.

Along the way we stopped at several hot spots including Baby Bridge, Ariruri, the Bushiribana ruins and the Natural Bridge. The Bushiribana ruins are pretty neat to see if you think about the history of them. These are the old gold mill ruins, and are a national historical cultural site dating back to the 1400’s!  We spent some time here letting the boys climb and explore. There’s also a food truck here if you are ready for lunch or a drink. We passed. There were lots of people on 4Wheelers coming in from an excursion so we didn’t want to get mixed up with them. We decided to hit the desert road on to the next top, which was the natural bridge.

Once we left the natural bridge, we kept going on until we got to the Parke Nacional Arikok which UTVs are not allowed. We turned around, and went back into civilization where we found a paved road. That took us into Santa Cruz where we would stop for a bite to eat. Not exactly because we were starving but because we were thirsty from being in the desert all morning. We ended up stopping at a McDonald’s where we’d grab a quick bite to eat. We wanted quick and cheap so we could continue on with our day. McDonald’s was only 56.35 Arubian ($31.48 USD). We washed up in their bathroom, replenished ourselves and back on the road we went!

We had spent all morning in the desert and we were finally back on land. We hit the highway and headed toward San Nicolas, which is on the opposite side of the island. We drove through Seroe Colorado and into Baby Beach. Most of the cruise passengers tend to go to Eagle Beach since it’s close to the cruise port. There are also other beaches near Eagle Beach including Arashi Beach and Palm Beach. We like to get away from the cruise crowd. Baby Beach is very laid back and B E A U T I F U L and doesn’t have many people at it. If I had to guess, I would say there were maybe 25 people there? The next time we go to Aruba, we will be spending the day at Baby Beach.

After we spent some time at Baby Beach, we decided to work our way back to Oranjestad. Once we were back in Oranjestad, we decided to ride up to Eagle Beach in the tourist zone just to site-see. This is where all of the high rise hotels are in Aruba. There is lots of shopping and it’s very commercialized.

From there, we decided to go ahead and drop the UTV back off since we were close. We headed back to Off-Road Evolution Aruba where we met Ian. He took us back to the cruise terminal from there.

Once we got back to the terminal, we walked over to the Renaissance Mall where my son wanted to shop at Louis Vuitton, Gucci and Dolce & Gabanna. Those are stores he usually shops at and he loves going there. He spent some time in LV picking out some colognes.

By this time, it was getting about dinner time. We walked back to the cruise ship, shopping along the way. We took our purchases and stinky bodies back to the ship where we’d drop everything off, and take showers.

Once we took showers, we walked back to Lucy’s Retired Surfers Bar which is not far from the port. This is somewhere we’ve been before and knew we liked. Plus, today was TACO TUESDAY! The atmosphere at Lucy’s is always great. We spent some time there with our friends, eating tacos. Lucy’s was only $46.00!

Finally we were full, hot, and tired. We went back to the ship and did a few ship activities. Then we went to the casino, and ended up crashing around midnight.

That was the end of our day in Aruba. Be sure to go back to the main posting for this trip to continue reading!

If you plan on renting a UTV for the day in Aruba, be sure to download an offline map on your Google Maps to use. That way you don’t get lost. maps.me works as well, but Google Maps works the best. Ian also gave us a paper map to use just in case.